"Similar to climbing Ben Nevis!" The Geeks at the Gates Episode Fifty Eight, in conversati

"Did you wish really hard?" The Geeks at the Gates Episode Fifty Four, still corrupting Al

"Do we make an omlette?" The Geeks at the Gates on the Radio - 10th September Shownotes

"Similar to climbing Ben Nevis!" The Geeks at the Gates Episode Fifty Eight, in conversati 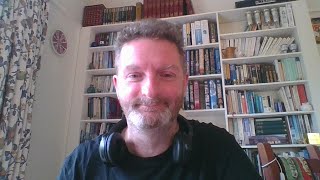 Comics for the Summer - More than Superheroes, but we've got them too! Part 3

Well, we promised you some superheroes, so I guess we'd better move on to the capes, the cowls and the powers...

We'll stay away from the obvious characters though - partly on the grounds that you probably already know what you think about the likes of Batman, and Spider-Man, but mostly because there is just so much of the major characters out there we'd need a couple of posts for each of them to even scratch the surface.

So we're going to introduce you to some of the super-types that you might not be so familiar with, starting with Scott MCloud's excellent Zot!

Originally published by Eclipse Comics between 1984 and 1990, the series was conceived by McCloud as a more positive reaction to the grim gritty superhero fayre of the time - this was the era of Man Without Fear, The Dark Knight Returns, V for Vendetta and Watchmen, after all*, the first ten issues were in colour and are almost impossible to get hold of, but the following black and white issues published between 1987 and 1991 have been collected into one massive 'phone-book of a tome which should keep you entertained for quite sometime on your summer break.

Zot! tells the story of Jenny Weaver, a regular Middle American teenage girl, and her adventures with Zachary T. Paleozogt, known to his friends as Zot, who is a sort of a golden age Superboy type figure from an alternative Earth which looks a lot like a nineteen sixties view of the future. He flies using gravity boots, has a ten shot laser pistol and the sort of positive outlook on life that would be annoying if it weren't so endearing.

Together they battle over the top enemies such as The Devoes, a human cult that believes coming down from the trees was the worst mistake humanity ever made and wants to devolve us all back into apes, and Dekko, a crazed (but artistic) cyborg who looks like the Chrysler building.

The whole thing is huge fun, but it's also profoundly moving in places, and I guarantee that once read, this is a book that will have you thinking about it forever.

Perhaps a little more mainstream, and certainly more recent are the two volumes of The Unstoppable Wasp, collecting all eight issues of the sadly short lived Marvel series from 2016 - 2017. If you've seen the Ant-Man and the Wasp movie you should know that this is a different Wasp, although Janet Van-Dyne, the original Wasp who does feature in the movie turns up towards the end.

This Wasp is Nadia Pym, the daughter Hank Pym (the original Ant-Man) never knew he had. She was raised in the Red Room, the same facility that trained Black Widow to be an assassin, but rather than make her a killer they trained her to use her scientific genius (because she seriously takes after her dad) for their evil ends.

But like Black Widow before her, teenaged Nadia escaped to America where she found that Hank was dead, but that she could follow his work, using the size altering "pym particles" to create her own Wasp suit.

Quite simply, Nadia Pym is the most positive character in the Marvel Universe. She's also a great hero for young girls to look up to. She sets out to find other young women with science and engineering skills to found the Genius In action Research Lab, otherwise known as G.I.R.L. because she learns that there's a list of the smartest people in the universe that only has one girl on it (albeit she's at the top) which causes her to assume that not very many girls can have been given the opportunity to take the test

Offering endless positivity and boundless fun, this is aimed at pre-teen girl readers, but I'm a forty six year old man, and I loved it so I think it's fair to say there's something for everyone here.

Finally for this post, I feel the need to introduce you to two more young heroes you might not've checked out. Batman and Superman are familiar to everyone of course, but their kids are perhaps less well known outside of DC comics reading circles, which is a shame because their book The Super Sons is another not-too-serious but action packed delight that is perfect for a lazy summer afternoon.

Jon Kent is the son of the Rebirth versions of Clark Kent And Lois Lane. He's a good kid, slowly learning to control his developing powers and very much growing up in an idyllic, loving, family environment.

Damien Wayne is the son of Bruce Wayne and Talia al Ghul. Born and raised without his father's knowledge for the first ten years or so of his life, brought up amongst his grandfather's League of Assassins and trained to be a ruthless killer - he's now trying to get over the habit od .

Honestly? They really don't have much in common. But you know what it's like when you're kids. If your parents are friends you're just sort of expected to get on with each other...

So, the open hearted, optimistic Jon and the darkly cynical Damien are thrown together and find that in spite of their differences they have one thing that will always bind them together - they are the only people in the world who know what it is to be the son of one of the planet's greatest heroes.

And of course Damien is calculating enough to understand that it's sometimes handy to have somebody around who can fly and has super strength (not that he'd ever admit that) and Jon does occasionally feel a little rebellious...

Essentially, this is largely the story of Damien getting them both into trouble, and Jon getting them out of it - because while they both could easily call their dad for help would you really want to be a the kid who has to call Batman to bail him out at three in the morning?

Like everything else we've discussed in this post, Super Sons is a great big dollop of fun. Entertaining without being silly, serious enough to be gripping without going all "grimdark" and we commend it to you!